It’s been months since I’ve found time for the weekend Globe and Mail. But Saturday morning, after a week of so much going on, I felt good snuggling up on the couch and just reading.

The title for Saturday’s coronavirus edition could be (to steal from Dave Eggers) A Heartbreaking Work of Staggering Genius. The writing’s fabulous. The stories pull at your heartstrings. And there are virtually no advertisements. No one’s buying cars. No one wants tickets to Hamilton. No one’s planning a trip to Mexico.

There are few full-page ads, and almost all of them relate to the pandemic.

“We’ll beat this together,” says the University Health Network. “Our lives have changed, but not Toronto’s relentless spirit of compassion,” touts St. Michael’s Hospital. Donate. Donate. Please. There’s a “What You Need to Know to Stop the Spread of COVID-19” ad from the provincial government.

There are also seven pages of birth and mostly death notices. 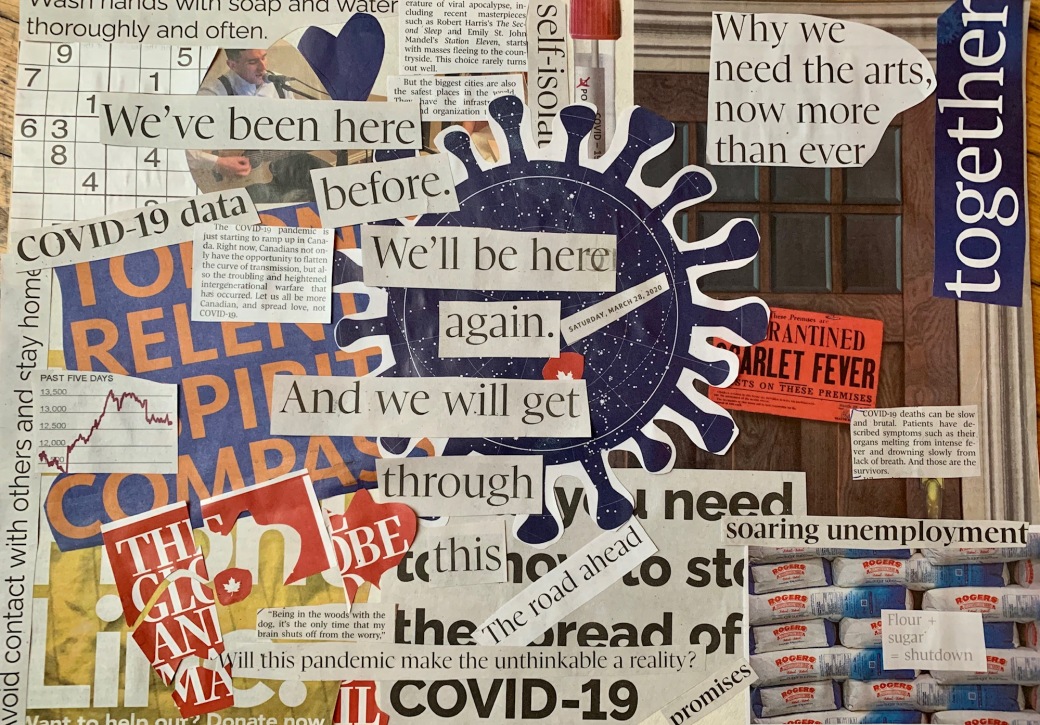 The tone of my journey was set by the first few lines of text. Usually Sylvia Stead comments on the way the paper covers a certain topic or replies to criticism of a specific story. But on Saturday The Globe’s public reporter presented an ode to journalism. A kind of how-to of how journalism’s done right.

Her piece is the one you’d give to someone who wants to know what journalists do. “We follow the science and the experts,” writes Stead.

As I read, I became aware of my habit of licking my index finger, pre-coronavirus-style, to turn pages. I do the same to open those thin plastic produce bags at the grocery store (let’s call them PPBs) and the flimsy bags we use when we’re out with the dog.

My Gen Z daughter could relate to the PPBs (not to be confused with PPEs, a common pandemic acronym). But she only reads online, so she had no idea what I was talking about with respect to the paper.

First up, page A3. Will this pandemic make the unthinkable reality?

“Doctors and nurses are writing their wills. Patients are signing do-not-resuscitate orders. … Preparing for death has become the grim new reality for everyone walking into a hospital during the coronavirus pandemic,” writes André Picard. “The time to prepare for the unthinkable is when we still have time to think.”

It seems we’re closing in on that time. 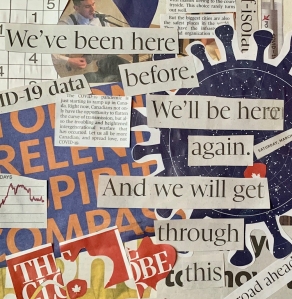 University Avenue. Quoting a street pastor, reporter Jeff Gray writes: “Unless the city finds hundreds more hotel rooms or other more spread-out accommodations for its shelter population quickly, ‘we may end up seeing those numbers of people coming out, instead, in body bags.’”

There’s a story on the artist who’s making Honest-Ed’s-like “We’re All in This Together” posters. And one on Canadians deciding to “shelter in place” (another timely term) in Argentina and France because it’s safer than travelling home.

I learn about what’s going on in France. “French quarantine rules allow [the French] to walk one kilometre in either direction along their residential road. … The kids can’t otherwise leave the house, even when Ms. Laing buys groceries or runs other errands.”

There are two full pages of personal stories: the new mom, the birthday party. I was most touched by the newlyweds and their non-wedding wedding. My friends are now hosting non-birthday-party birthday parties too. For once they get to have their cake and eat it.

A funeral home in Newfoundland is now that province’s COVID-19 pandemic hotspot. As of last Friday, 68 of 102 confirmed cases were linked to two funerals.

“This virus is kind of like dying. You don’t think it’s going to happen to you, until it does,” the funeral home’s director, who’s awaiting test results, reportedly said.

“Patients Anxious as Surgeries Postponed,” screams a headline. Life in Washington. Trump worries that Chinese goods are sneaking into the USA via Canada. (I had no idea the border issue had anything to do with that!)

Fake news and disinformation from China and Russia. “Russia would like to see the EU divided, and to pick off some of the countries like Italy,” says a senior research fellow from the Polish Institute of International Affairs.

A piece on what’s worth watching on Netflix. How local booksellers are delivering books. How pets are enjoying self-isolation because they get so many walks.

I move on to the opinion section and a piece by Toronto physician and author Vincent Lam. “Our actions affect others, whether by cough, touch or physical proximity,” he writes.

“Your mission: read the stack of books on your bedside table. Dust off the neglected exercise equipment. Cook creatively with the neglected cans in the back of your pantry. Make your toilet paper last a little longer before you go back to the store.”

Next up is a piece by another physician, whose aging husband is in the hospital. “I feel like crying but I don’t,” she writes. “It’s hard to work when you are sobbing, after all.”

Lauralee Morris has worked around the world and has seen the future. “What will happen when the virus gets out in the slums of Freetown, Nairobi and Manila? Or even worse, in the crowded refugee camps around the world: Dadaab, Kutupalong, Azraq?

I have worked in all those camps and the idea of asking people there to practise physical distancing seems like an insulting joke. ICU beds? Ventilators? Not a chance. Not even for the young.”

In contrast, the current rules in France seem like nothing.

“We are only allowed out of the house to go to work (if it can’t be suspended or done from home), to go grocery shopping (within one kilometre of the house), to a doctor (urgent visits only), to jog (again, one kilometre) or to walk our dogs. No dog, no walk.”

If you’re caught breaking the rules, you’ll be fined up to $580. Repeat offences merit ten times that sum or six months in prison. Forests, parks, riverbanks and open-air food markets are closed.

A Toronto friend said when I messaged her this quote, “Wow, we’re living a carefree life in comparison.”

I like knowing what’s happening in places where the coronavirus wave has already hit. It gives a taste of what might happen here. It reminds us of all we have to be grateful for.

Margaret Atwood’s piece in the print version of the paper is titled We’ve been here before. We’ll be here again. And we will get through this. I awaken to the pandemic’s psychological river of time. (Atwood’s online story is called “Growing Up in Quarantineland: Childhood Nightmares in the Age of Germs Prepared Me for Coronavirus.”)

“The worst thing about the nasty germs that were causing all of these diseases, not to mention smells, was that they were invisible,” she writes. “Nothing is scarier than an enemy you can’t see.”

The Black Death in Europe had a 50% mortality rate. The death rate from pathogens introduced by Europeans to the inhabitants of the Americas, who had no immunity, was 80-90%. (WTF!?) Millions and millions of people died from the Spanish flu.

Atwood offers her solution for our situation.

“Plaster a virtual quarantine sign on your door, don’t let strangers in, consider yourself a potential plague vector, watch The Invasion of the Body Snatchers (again) or The Seventh Seal (again). And get out the scissors and paste, analogue or digital, or the pen and paper, ditto. If you yourself are not ill, the pandemic may have given you a gift! That gift is time. Always meant to write a novel or take up clog-dancing? Now’s your chance.”

But mostly, it’s this: “Humanity’s been through it before. There will be an Other Side, eventually. We just need to make it through this part, between Before and After. As novelists know, the middle section is the hardest to figure out. But it can be done.”

My last longish read is this very cool piece by a guy who’s written books on the art, science and politics of fear and prediction – and what Atwood calls the middle section.

“We are experiencing radical uncertainty,” writes Dan Gardner. “We are also discovering something about the psychology of uncertainty – something [a] prisoner [knows] intimately.

“What will come to pass is – of course – uncertain. But there is actually good reason to hope that while the worst of the epidemiological and economic crises lie ahead, the worst of the psychological crisis may already be behind us or will soon be. Anxiety may start to wane.”

Wow, I get that. How little we knew two weeks ago. How my heartbeat has slowed since yesterday.

There’s more, but I’ll gloss over. If I don’t post this story ASAP, the news of the day will make this all redundant. As will my feelings: they’re constantly changing.

The “Report on Business” section tells us to “think of last week’s stock market as a terminator movie.” There’s a story about the spike in sugar and flour sales. Questions on how the COVID-19 crisis will affect the eurozone. [“The sight of convoys of Russian military trucks on Italian roads would have been unimaginable in a NATO country only a few weeks ago,” writes The Globe’s foreign correspondent, Eric Reguly. (I follow him on Instagram and I miss his cycling stories.)]

And the arts section: my favourite! There’s Lucy Waverman’s tips for cooking while in quarantine. (We need that!) A piece on the comfort of horoscopes. And Kate Taylor on why we need the arts, now more than ever. (“You cannot have sex without the other person; art needs the body.”) There are also reviews of books on past pandemics. And a big, yellow centre spread on Every Movie Worth Watching on Canadian Streaming Services for Every Kind of Viewer (my capitalization).

In that distant past (two weeks ago), we were devastated that yoga studios had closed. (Now most of them are online.) It was a time before the Metropolitan Opera started broadcasting free nightly opera streams. Before Choir! Choir! Choir! started hosting online “social distan-sing-alongs.” (There’s another big one planned for April 11. This replaces a sold-out show that was to be held at Toronto’s Convocation Hall and will raise funds for the Canadian Cancer Society.)

We’ll get through this. But for now, stay the f*** home. And keep track of how you feel. That’s the most important thing. ❤️