On Thursday, I have just one session at the World Congress on Brain Injury. It’s gender, sex and brain injury at 10:30 a.m. I feel more like a health reporter today, but still my handwriting’s slow and deliberate like an architect’s. I’m tired.

The first talk looks at how gender influences women’s experiences of TBI (traumatic brain injury). Bottom line: female caregivers who put others’ needs before their own need support.

I can relate. Thank goodness my three daughters are in their teens and such troopers. (Right after my accident, they were cooks, drivers and schedulers. Even now they’ll take over and finally change my bedsheets, for example. That’s a big job and a massive energy drain.)

Next up is a Toronto Rehabilitation Institute study about patient knowledge of sex and gender.

Close eyes. Drink water. Breathe, my notes say. Toronto Rehab is my alma mater. It’s where I started understanding how to care for myself. 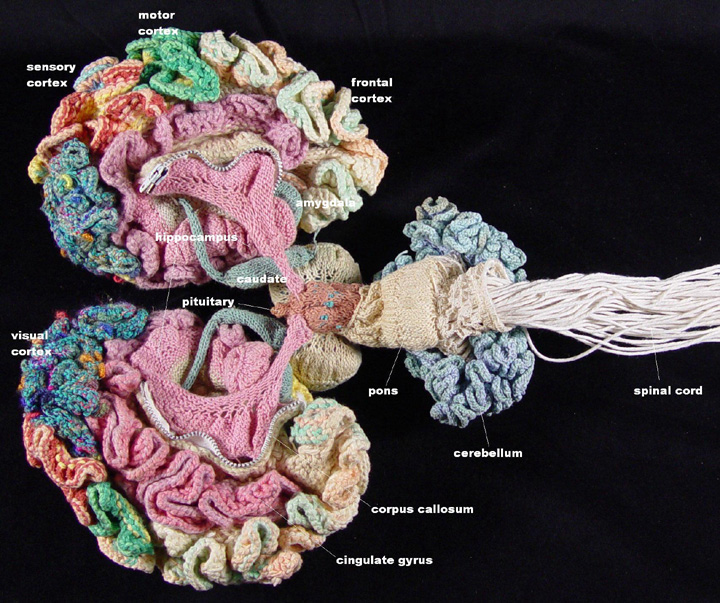 Psychiatrist Karen Norberg spent a year knitting this anatomically correct replica of the human brain, which she calls “the KB” (Knitted Brain). “I do think of her as a she,” Norberg told me.
Used with permission, copyright 2019 Karen Norberg.

The researchers have discovered that women (especially those under 30) understand the difference between sex and gender better than men. But most patients aren’t interested in how concussion affects men and women differently, even though the differences are huge.

A University of Toronto prof discusses indirect effects in the workplace and “society’s perception of reasonable time to recover.” This is getting too close for comfort. How do my colleagues perceive my prolonged recovery? It’s been two years.

The next topic up is girls, women and the injured brain. This one really triggers me, my notes say. Between 30% and 50% of head injuries involve injury to the pituitary gland. Women may have too much or too little of a certain hormone. They need prolactin for breastfeeding.

This is loaded. I want to cry. I can’t take notes.

Clients need to be validated and heard, says Toronto social worker Eden Dales. “It’s OK to understand what we can’t see. That’s when the healing begins.” Track your menstrual cycle, she adds. (There’s an app for that.) “The experience of symptoms based on cycle is undeniable.” 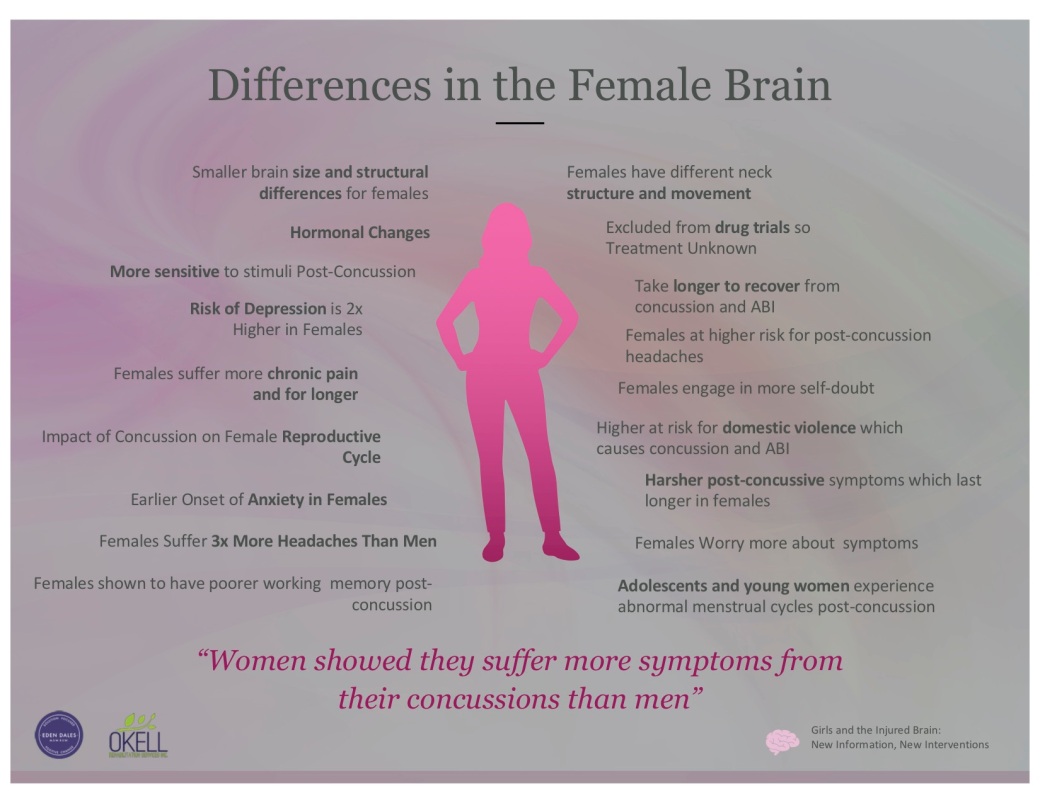 Are there differences between the male and female brain? Hell, yeah!
Image by Eden Dales and Lauren Okell. Used by permission.

Dr. Gillian Einstein (a distant relation of the Einstein), who studies sex and gender in women’s health and aging, blew my mind a few years ago at a talk on estrogen and the brain. “It’s still the case that most drug tests are done on male rats,” she said. Eight of 10 drugs taken off the market between 1998 and 2001 had adverse effects on women. There’s a direct connection between the ovaries and the brain, but no one’s studying ovaries.

My next hit on the same topic was just two days before the World Congress on Brain Injury. The author of Invisible Women: Data Bias in a World Designed for Men was on CBC’s The Current talking about the gender gap in medical data and how it’s costing women their lives. She said among other shockers that the design of crash test dummies is based on the average male body, which differs from a woman’s. “I was so shocked and so angry that women were dying because of this,” she said.

Now here I am again, and the topic’s more relevant than ever because, well, the brain.

The room is big and the lights are bright. I move closer to the front so I can snap the info-packed slides. I make sure my voice recorder’s on, but how will I ever find the energy to listen to everything?

“About 85 per cent of patients with mTBI (mild traumatic brain injury) recover,” says Dales. “Fifteen per cent have PCS (post-concussion syndrome).” Is that me? I write. (In fact, my occupational therapist says no, because imaging revealed I had a brain hemorrhage. Nonetheless, many of the symptoms are the same.)

The next study is all about sex (more precisely: sex-specific neural changes that follow concussion and sub-concussive impacts). How women develop and age differently. How we’re connected differently. How disease states, such as Alzheimer’s, differ.

Of the 1,305 articles she and Dr. Angela Colantonio (a top researcher and a Pink Concussions professional advisory board member) reviewed, five looked at the effects of sex. (I did the math – that’s 0.38%!)

My brain is on fire.

As soon as the session’s over, I head home.

I post a photo on Instagram and Facebook and end with the note: “I have a craving for chocolate, a massage, a hot bath, a swim, more chocolate, a head massage, a brain massage. Not sure what to make of this.”

But I do know what to make of this. I’m overloaded and need to care for myself. That’s not something I knew much about a year ago.